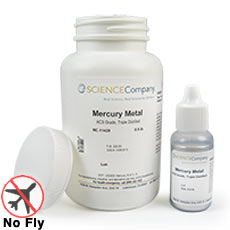 Our mercury is triple distilled, ACS instrument grade. It is commonly used in the mining and refining of gold and silver, as well as in the production of other metals.

Mercury (also quicksilver) is considered dangerous by skin absorption and inhalation of fumes. If you come into contact with it, wash your hands and any affected areas thoroughly with soap and water. Mercury spills need to be cleaned up immediately. Small mercury spills can be treated with powdered sulfur.

Mercury only ships to destinations within the 48 contiguous US states and Canada using Standard Ground, 2 x 1/2lb per package • No air deliveries allowed • Customers in Canada should expect additional duties, taxes, and customs clearance service fees due upon delivery.

To use sulfur for mercury spill cleanup, follow these steps:

Don protective gear: Wear gloves, goggles, and a mask to protect yourself from exposure to mercury.

For chemical quality assurance our chemicals are "factory fresh" from qualified industrial chemical suppliers. To ensure top quality we CANNOT ACCEPT RETURNS on chemical purchases, even if the container is unopened.

Certificates of Analysis for chemicals are available upon request. Use our request page at this link 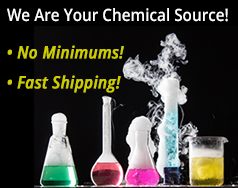