Some history to begin, this simple electric motor works on relationships between magnetism and electricity, first formulated by a Frenchman in 1820, with the concept developed further in by a British scientist a year later in 1821. He demonstrated this first electric motor, known as a Homopolar motor. 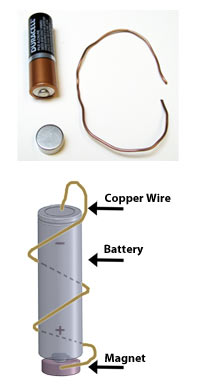 Congratulations! You have just put together the world`s simplest electric motor!

(A CAUTION: only use motor a few minutes at a time as the battery will get warm.)